As I start writing this new set of posts, less than 24 hours have gone by since arriving from the expedition. I am being completely honest with you when I say that I still miss the words for accurately describing the sensations I came across during these last 5 days. I guess somethings are really to be felt and not put in words. Very few have the ability to transpose this and I’m certainly not one of them. Please bear that in mind while reading the remaining posts of this series.

As with any “going” trip, excitement and the quest for the adventure fuel the emotions and make you jump ahead. The day started early at about 5:00 GMT (time zone is important as it will change during the day). Waking up, warm shower to become fully awake from a short night of sleep. It is inevitable: whenever a big event is coming I can’t help having an agitated night and going to bet later than I should. Yet alone with this kind of event.

Breakfast, a thermal bottle filled with expressos and off I go pack up the car. Early morning kiss to the till sleeping family while I go out the door. PM joined me at the scheduled hour starting the pickup round of the 2 other car companions BM and LL. At 7:50 GMT we arrived at the gathering point from where we left in the 2 car caravan targeting Leiria, where we would join the 3rd car. The schedule was strict and fluent, allowing us to reach Chaves our final pickup point at lunch hour. And what a lunch! We feasted like kings with a magnificent barbecue provided by LA and his fantastic family. All packed (trunks and stomachs) it was time for the last leg of the journey.

On the road to Gijon, we passed magnificent water areas, with a marvelous sunshine and a cloudy sky to die for. After getting through the tunnels into the north side of the mountains… we found but rain and fog all the way to Cangas de Oniz. It’s the harsh reality of the mountains, but actually it works quite well for landscape photography. 4 hours of good road and we were parked outside of the cozy little hotel where we would stay for the next 3 nights. We took few minutes to check-in, dump the non-photographic stuff into the rooms and rushed out for a sunless sunset.

Where we hoped there was a flaming Naranjo de Bulnes with sunset colors, there were clouds and not the most interesting ones. A couple of shots, some short distance scouting following the running water nearby and… off we go into the river side, trying to acquire a couple of the possible shots. The fresh and lively 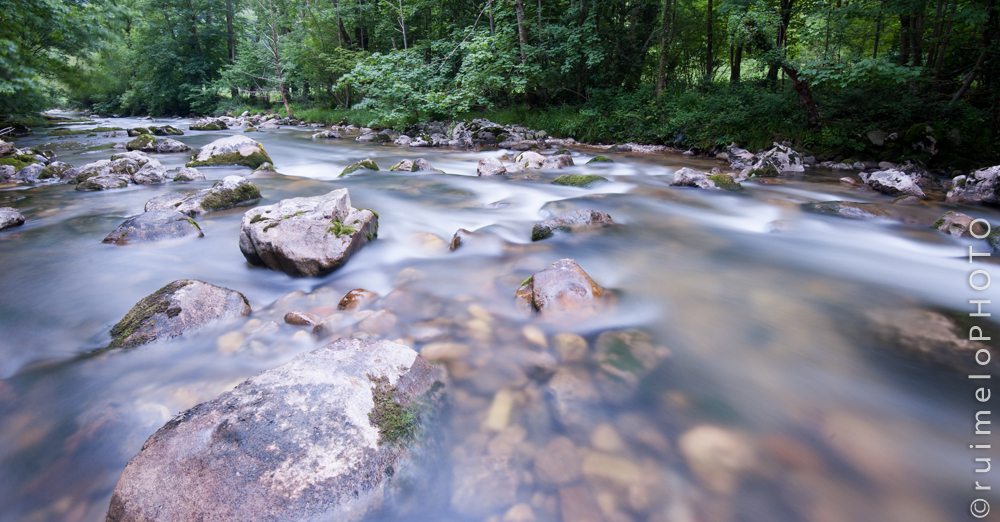 Adventure points at this location: nettles, big and strong enough to hurt my legs through the trousers! Oh well, that framing was just asking for it… I couldn’t resist… and neither could my legs. 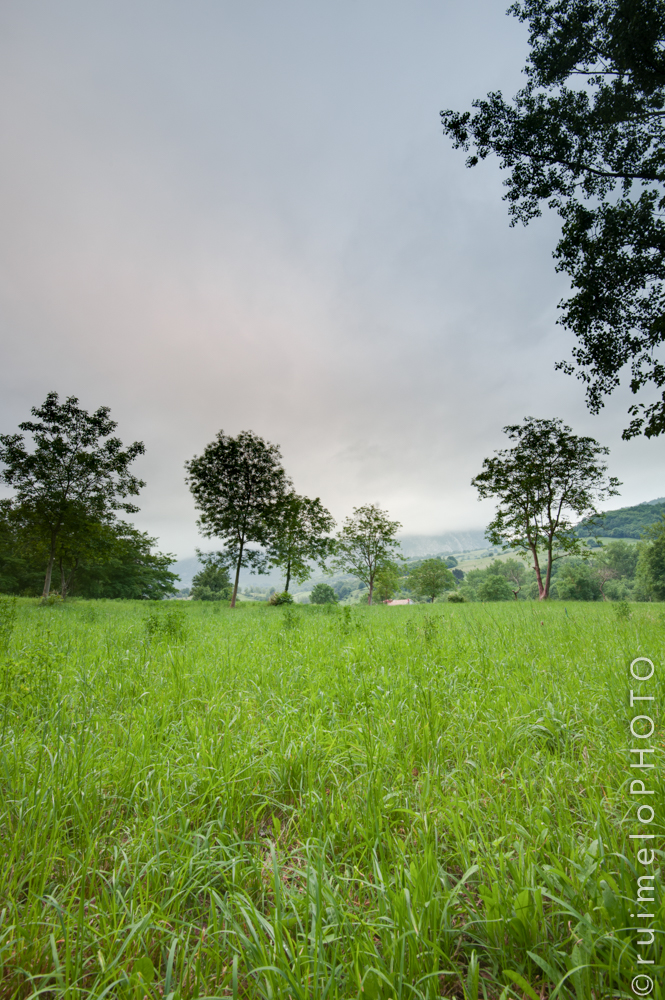 Fields facing El Naranjo. Today it was shy and hidden.

Dinner with tapas, sidra and beer recovered our spirit followed by a short night of sleep which rested our bodies. The sleeping part was limited to about 5 hours at most.